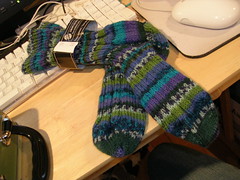 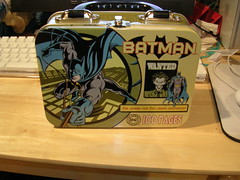 All the gifties inside 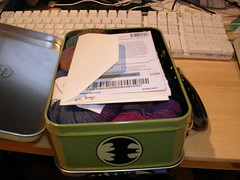 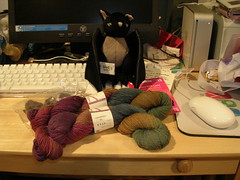 First, I gave my Monkey socks to my mom's yarn store and . . . I forgot to get pics! I'll ask her to take some and sent them to me.

First, there is this: 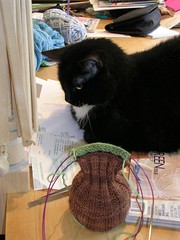 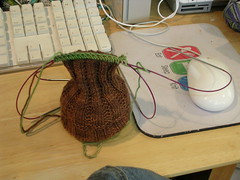 Wanna see a chevron scarf? All the cool kids are doing it -- 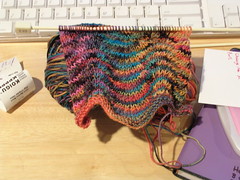 Next, a custom pair of sneakers: 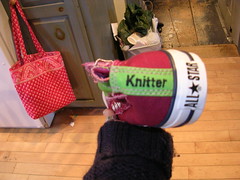 I gotta say that my sockpal's information for her socks was different than my last 2 sockpals. Neutral earth tones, nothing fancy/frilly/lacy.

I was at a loss for words when I read what she wanted. Granted, it's her choice, but I see socks as a way to have fun with your wardrobe. If there is one thing you can have fun with in a "corporate" environment, I'd say it would be your socks.

Unfortunately for me, I don't buy earth tone sock yarn. So, there was shopping involved -- I know, don't you feel sorry for me!!! I chose Koigu (if you're going to knit neutral earth tones, go for the good stuff), in brown for the most of the sock and a subtly shaded green.

As for a pattern, I went with something I'll know for myself later in different colors -- Roza's Socks from the Spring IK. It looks a smidge lacy, but that's due to the brioche rib. Other than that, it's your basic 3x3 rib.

Oh, I recently finished a pair of Monkey socks, using Plymouth Sockotta. I'll take pics and post those this weekend.

I've decided that what I really need, other than my 2 cats and 1 dog, is a friend in New Hampshire. Not likely to happen anytime soon, where does one go to meet friends?, but it's what I need.

Trying to empathize with people who have just gone through a tragedy, when you yourself were unaffected. I, and everyone else, was saddened at the VA Tech shootings. But to go out on a limb and say, “I can only imagine their pain/loss/suffering, etc.” is a load of bullshit. You do not “imagine” someone’s pain. You do not have the right to try to put their feelings into context that makes it easier for you to categorize, tag and shuffle away for the next round of tragedy. You do not get that right, if you are not directly affected. You may sympathize, but you do not get to put yourself in their shoes to discuss the pain and tragedy. Lord knows they’d rather not be in their shoes, and they have no choice. You do. Quit it. It’s insulting.

Handing off your work to people who already have work. Yes, those that are busiest make sure it’s done correctly. And when they do the work, ‘cause you know they will, you are not allowed to take responsibility for it. Though any blame they receive for the execution os said work should rightly fall on your shoulders. You are more than capable and competent. Do the goddamn fucking work yourself.

Singling people out for “incorrect” answers to a question. If no one’s talking, and someone takes a chance, do not single them out as someone who “got it wrong” and let everyone know it. Give them credit for at least trying to have the correct answer. At least they, unlike other people, are trying.

If someone goes above you to get something resolved, do not call your “ally” to play the “I got burned card.” Chances are your ally already knows that, saw the volley and serve, and depending on the ally, may not back you up at all. After all, when your ally is in need of a friend, do you have their back? If yes, the ally should “stick up” for you; if not, all bets are off.

Do not come back to work after 5-6 months on FMLA and expect that we all will “bend over backwards” to do things the way you want them. Life did not stop when you were away, and business continued. I know it sucks that everyone didn’t fall apart when you were gone, but suck it up and deal. The sun does not shine out of your ass, and the universe does not revolve around you.

If you are the manager of a group of people, in the above situation, do not blindly take someone’s side against all others. Doing this may piss your subordinates off, make them wonder why it’s important, and may result in them slacking off for real. Though if you want a complete business turnover, be my guest.

If you’re being a BITCH and someone has had ENOUGH of it, and is bitchy back to you, take it. You’ve earned it. And shut up already. No one gives a crap/rats ass about “oh my god, I’m so old at 26” or “oh my god, I’m so pathetic because I’m single.” There are people out there older than you who feel YOUNGER than you look, and people out there who relish in being single. Quit trying to play the sympathy violin. You’re out of tune.